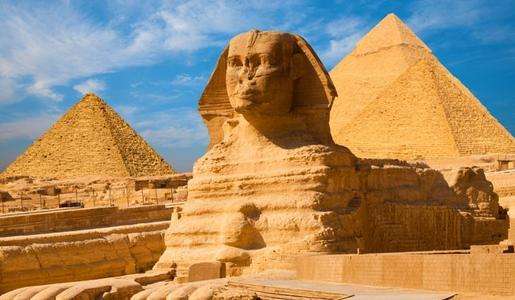 “Have you heard of the Riddle of the Sphinx?” I asked my son.

“In ancient Egypt and Greece myths, Sphinx is a monster creature with a lion’s body and a human’s head. The most famous statue of Sphinx is the one you often see next to the Great Pyramid.

“Legend has it that ” I continued, “Sphinx sat in front of the city of Thebes, and asked a riddle to everyone who wanted to enter the city. They could only enter if they answered the riddle. No one ever could.” I actually modified the version of the story from PG to G, omitting the fact Sphinx would eat the ones who could not answer the riddle.

“What was the riddle?”

“Here it is: What goes on four feet in the morning, two feet at noon, and three feet in the evening?”

After several failed tries, son gave up and asked me for the answer. So I continued, “One day, Oedipus came to the city, and Sphinx asked him the same riddle. This time, however, the clever Oedipus gave his answer: it is human! When babies are born, they crawl with their hands and feet. When they grow up, they can stand on their feet. When they get old, they need canes, like their third feet.”

Son seemed very interested in the story, so I decided to sneak in some math fun as additions. So I continued with my version of the story, “Sphinx was not happy. It had to let Oedipus enter the city. But it decided to give Oedipus more puzzles before letting him go. So it asked the next puzzle: ‘What is the magic number, if you add this number to any other number, the sum is the other number. If you multiply this number with any other number, the product is still the magic number?’”

“What is the magic number, if you multiply this number with any other number, the product is still the other number?”

“Alright, you are as smart as Oedipus! So Oedipus entered the city of Thebans and later became the King of Thebans.”

The takeaway: 0 and 1 are magic numbers and they have very special properties.