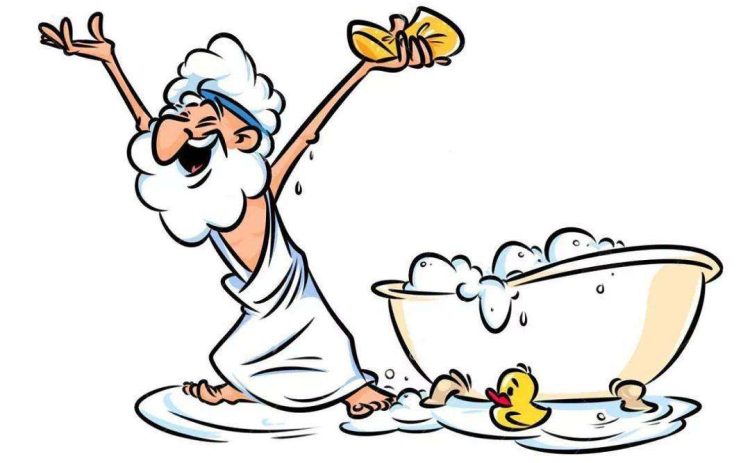 Son is very interested in ancient Greece and its famous people. So I decided to give him a mini-series on Greek Mathematicians. Archimedes was the first.

Archimedes was one of the greatest scientists of ancient Greece, from the city state of Syracuse in Sicily, then a Greek colony. His achievements spanned mathematics, physics and astronomy. He also had a few famous stories.

Legend has it that the King of Syracuse had a crown made of pure Gold, which he supplied. But he suspected the dishonest Goldsmith replaced some of the Gold with silver, so he could steal the Gold. The King asked Archimedes to find a way to prove it, one way or another. The condition was that Archimedes could not damage the crown.

It was a difficult problem. The Goldsmith was smart and sneaky. The crown weighed the same as the Gold the King provided. If some Gold was replaced with silver, the Goldsmith mixed the silver well with the rest of the Gold, so there was no way to tell from the appearance.

Archimedes tried several days to find a solution to no avail. Exhausted, he decided to take a bath. When he was lying down in the bathtub, he saw the water spilled out. Suddenly, a flash of brilliance struck him. He was so excited. He ran out to the streets shouting “Eureka! Eureka! Eureka!”. Eureka is Greek and means “I have found it!”. Archimedes was so excited. But he forgot one thing: since he was taking a bath, he was not dressed!

The King got his answer. The Goldsmith got his punishment. Archimedes left a famous Eureka moment in history.