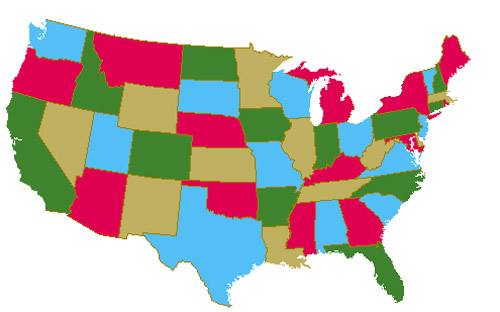 Son was filling colors in his drawings, which reminded me of some fun in math: “Do you know how many colors are needed for a world map?” I asked son.

“Let me ask the question better. There are many countries in the world. In the map, we want to use different colors for any two countries that share a border, so that you can easily recognize different countries. What’s the smallest number of colors you need?”

“If a country has 10 neighboring countries, then we need 11 colors right?”

Son now understood the question. I printed a blank Africa map as an example for him to fill in the colors.

“It seems 3 colors are enough.” Son said after trying for a while.

“It turns out 3 colors are not enough.” I drew an example.

In this example, each of the four countries is bordering another country, so we need four colors. So are 4 colors enough? This was actually one of the most famous conjectures in the history of math. A conjecture is a seemingly-true statement that is not mathematically proved. In plain words, a conjecture is an unsolved math problem.

The history of the four-color conjecture was an interesting story by itself. It was first proposed in 1852 by Francis Guthrie, a then-English college math student. He later migrated to South Africa and became a mathematician. He proposed this problem when coloring an England map.

The four-color conjecture is a problem of Topology, a math sub-branch. We mentioned Topology before in our Mobius band article.

The four-color problem seemed pretty straightforward. And many mathematicians immediately tried to solve it after it was proposed, thinking it shouldn’t be too difficult. It turned out to be not easy. Finally, in 1879, Alfred Kempe provided a proof and people thought that was it. However, 11 years later, it was found incorrect.

To celebrate this major achievement, the math department of UIUC used this postage stamp for several years for outgoing mails. It said “Four Colors Suffice”!